Atum 2 adds a new Dimension, which is themed around Deserts. Inside, you can find appropriate creatures, mobs, structures, biomes and even dungeons.

Before being able to open a portal to Atum, you’ll need to craft a Scarab. Luckily, these are relatively cheap to craft and available to most players. All you require is 3 Gold Ingots and 1 Diamond.

After crafting the Scarab, you can start building the portal to Atum. To create an Atum Portal, you’ll need 49 Sandstone and 3 Buckets of Water. To start, place down a 5×5 area of Sandstone that is 1 block high. You should have 24 Sandstone remaining.

This is going to be the base of the Atum Portal. Now, create a 1 block high wall on the outer edge of the base, leaving a hollow 3×3 area. There should be 8 Sandstone remaining.

Use these 8 Sandstone to add 2 block high pillars to each corner. Use your 2 Buckets of Water to create an infinite water source, and ensure that the entirety of the hollow area is filled with water source blocks. 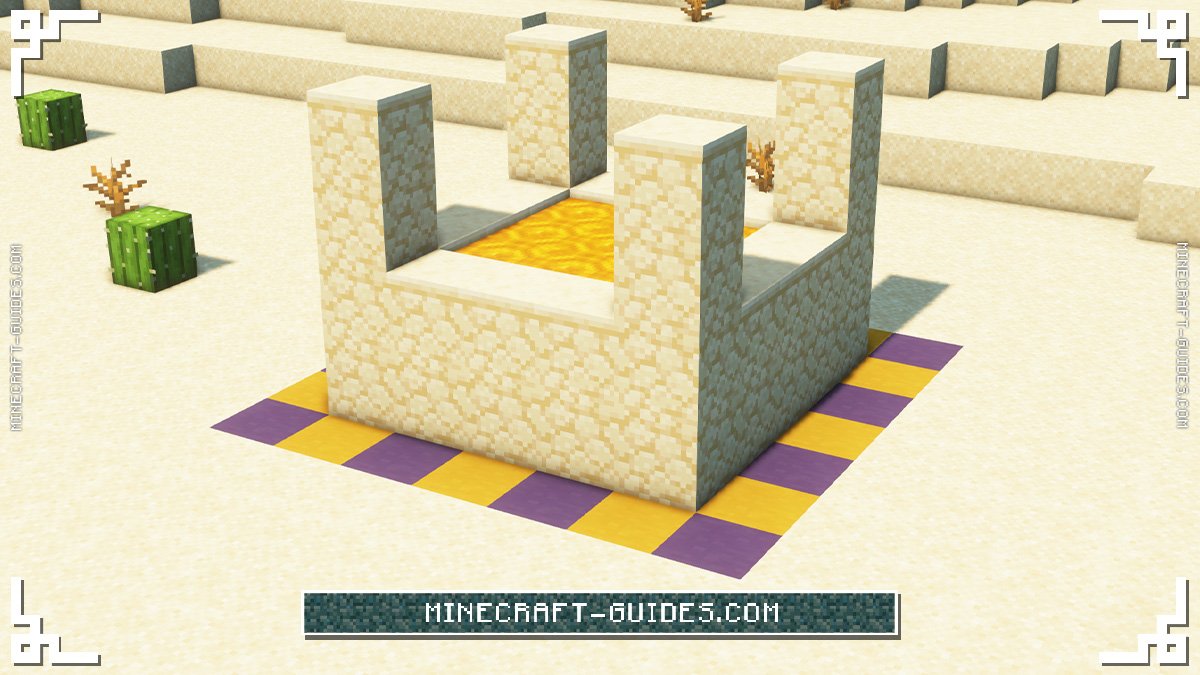 An Open Portal to AtumWhen you throw the Scarab into the water, it should turn yellow after a few seconds. That will indicate that the Portal is open, and you can enter Atum. Some older versions of Minecraft may require that you right click the water with the Scarab instead.

Use the image above as a reference for creating the Portal. Ignore the Purple and Yellow Terracotta, as they are there to give you a reference on the scale of the Portal. If you want, the Portal can be expanded on from 3×3, to a size of your choosing.

After entering the portal, you’ll be in the Atum Dimension. Inside, another Portal will be available which can take you back to the Overworld.

Ores generate in Atum like they do in the Overworld, so you can craft Scarabs while inside Atum. However, Buckets of Water can only be placed down in the Oasis Biome, or at a height level below 48, so keep that in mind.

One of the most useful creatures provided by Atum 2 is the Camel. These can be found spawning all throughout the dimension. When you come across one, try mounting it repeatedly like you would with a Horse.

After it accepts you, its inventory can be opened with the E key. Camels can be equipped with Carpets for decoration, and Camel Armor to improve their defenses. They can also be equipped with Crates, which will allow them to carry items in their inventory.

Nebu Torches are an important item in Atum 2. It’s recommended to craft some, and leave them in your inventory before exploring the dimension. Locations like the Pyramid can’t be accessed without them.

Firstly, you need to mine Nebu Ore. This can be found underground in the caves of Atum. However they’re very rare, and will spawn in clusters of up to 8. A single Nebu Ore can be smelted, turning it into 3 Nebu Drops. Then, just combine a Coal/Charcoal with a Nebu Drop to obtain 4 Nebu Torches in return.

You might come across Pyramids inside Atum. These are dungeons, and you shouldn’t go inside unless you’re well equipped. An entrance to the Pyramid can be found on one of the 4 sides, but it might require some digging.

As you enter the Pyramid, you’ll be in the Atrium which contains 2 Spawners and 3 Chests. After clearing out this area, you can move down to the next floor, which brings you to a maze filled with traps. Use a Pickaxe on trap blocks to disable them.

Once you’ve beat the maze, you’ll reach the final floor. Here, you can find a Sarcophagus which contains a Pharaoh boss. 4 Nebu Torches need to be placed on the nearby Quandary Blocks to summon the boss.

The links above will take you to the CurseForge page for the Atum 2 Mod. It’s recommended to only download mods from CurseForge, as they are vetted to ensure that they’re safe, and you’re also supporting mod developers.