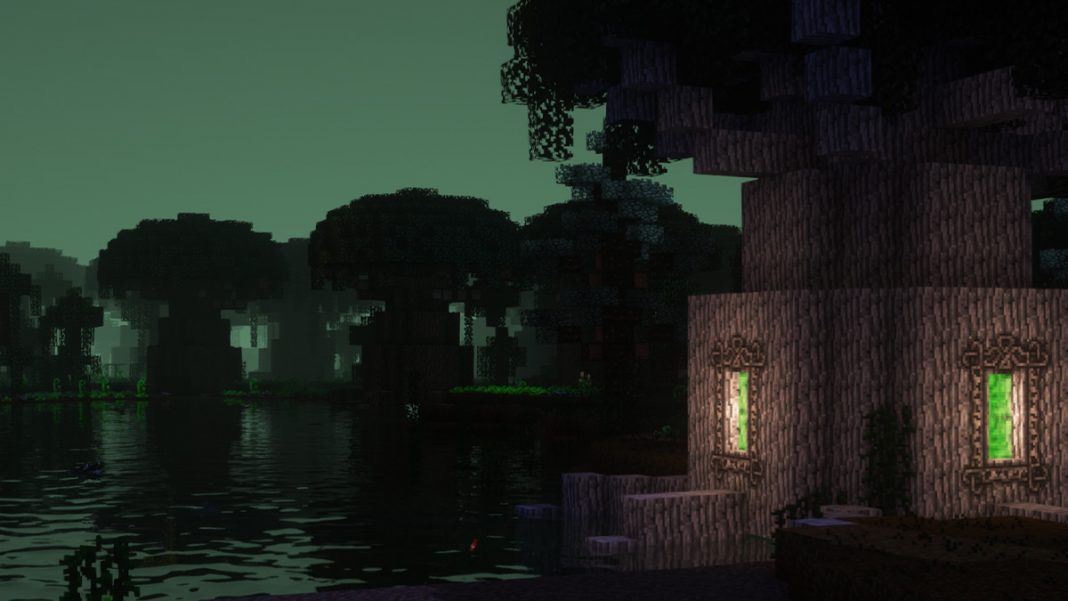 Discover some new Dimensions, filled with new dungeons, mobs, structures, equipment and bosses. The Dimensions in this list fill many different purposes!

In Vanilla Minecraft, there’s only 3 Dimensions. These are the Overworld, Nether and End. Thankfully, Minecraft 1.12.2 is probably one of the best versions when it comes to adding new Dimensions to explore. In this list, we’ll show you 10 of them.

All the buttons in this list link back to CurseForge. There, you can find more information about these mods, and download them for Minecraft. Make sure to read our other Minecraft Mod Lists too, for more great mods.

One of the best dimension mods available for Minecraft has to be the Twilight Forest. It’s a place filled with mystery, with all new Biomes, Dungeons, Mobs and Structures.

The main theme of the Twilight Forest is progression. Before being able to kill a certain boss, the one before it will need defeating etc. As you do so, new gear will be unlocked, which is quite powerful.

Reaching the Twilight Forest is easy. The only requirements are some Grass Blocks, Flowers, Buckets of Water and a single Diamond. Though it’s only safe for the most well equipped adventurers.

While it doesn’t add a new Dimension, The Lost Cities will instead transform the Overworld. From now on, it will be replaced with huge cities, which have various levels of destruction to them.

Within these buildings, you’ll often find hostile creatures like Zombies, Skeletons and Spiders, who are summoned from Spawners. But there’s the occasional Chest too containing loot. Other than that, the buildings are mostly empty.

There’s many different ways to play with this mod. One option is for a Zombie Apocalypse styled world, where cities have been left in ruins. Pairing it with something like Minecraft Comes Alive or Tektopia will allow you to simulate a survival game, where you’ll need to rebuild civilizations.

After creating a Scarab and throwing it into some Water, you’ll be able to enter the Atum 2 Dimension. It’s themed around Deserts, and consists of 9 new Biomes currently.

As you work your way through the harsh desert, lots of dungeons can be found, as well as 19 different variants of ruins. But there’s also some Oasis’, Crags, Dunes, Pyramids and Lighthouses.

Both passive and hostile creatures can also be found. To match the theme of the dimension, you might find Assassins, Mummy’s, Barbarians and Nomads. Whereas when it comes to animals, there’s Camels, Desert Wolves, Scarabs and Tarantulas.

If you ever struggle with collecting Ores in Minecraft, then you should definitely install Cavern II. It adds multiple dimensions into the game, which are all themed around mining. There’s the Cavern, Huge Cavern, Aqua Cavern and Mirage Worlds.

You’ll start out at the Cavern, and slowly increase your mining level, which will allow you to teleport to the other Cavern Dimensions. The best of them all is the Huge Cavern, which is shown on the image above, as Ores are going to be exposed everywhere.

Another feature of the mod is Mirage Worlds. In some Caverns, Mirage Library structures can be found, containing Mirage Books. These can be used on the Portal Frame to open even more dimensions, with all different properties.

Galacticraft adds multiple dimensions into Minecraft 1.12.2. However, they’re all in the form of planets, and can only be accessed by building lots of machines, and eventually flying a rocket into Space.

Through the mod, you can access locations like the Moon, Mars and Venus. But there’s also the option to even visit Asteroids, and create your own Space Stations. If that isn’t enough content for you, multiple add-ons exist which further enhance the functionality of Galacticraft.

You can explore locations in the appropriate Space Suit, build a Buggy and start terraforming planets. As you do, you’ll discover other life forms, as well as ruins and dungeons of other civilizations.

Dimensional Doors can be created by players, or found naturally spawning throughout your Minecraft world. When going through them, they allow you to travel between different Pocket Dimensions.

These can vary from simple hallways, to mazes and rooms filled with treasures. There’s definitely some risk, and some reward. As you travel throughout Pocket Dimensions, you might get lost, and never find your way back to the Overworld.

But some of these Dimensional Doors might even lead to Dungeons. Over time, you can unlock new equipment, and your own Pocket Dimensions which can be used to store your own items, or teleport between locations.

The Hunting Dimension is a relatively simple dimension mod. When you go through the Portal, you’ll find that it looks a lot like Minecraft’s original Overworld.

However, inside the Hunting Dimension, it’s always going to be nighttime. That way, mobs like Skeletons, Creepers, Spiders and Zombies are always available to defeat. Although they’re slightly stronger, and have higher armor and health amounts.

These creatures also have an increased chance of dropping additional loot, as well as experience. Using Creeping Moss, Biomes within the Hunting Dimension can easily be changed to your liking.

Instead of going below Bedrock to reach the Nether, you can go above the sky to reach the Aether Dimension after installing the mod. Reaching it is simple, just apply a Bucket of Water to a Glowstone Frame.

The Aether is filled with mystical creatures, who can be found roaming the floating islands of the world. As you explore, you can find 3 different dungeons, with each one having some challenging bosses to defeat.

Defeating these dungeons can provide you with lots of treasure. Not to mention all the new equipment that can be crafted, from materials like Zanite, Neptune and Phoenix, or the Valkyrie set.

Mystcraft allows you to travel between different dimensions (or ages), that you must create yourself. By creating a Book and adding your own Symbols, you can determine how a dimension is formed.

Symbols determine a lot during the Age-creation process. There’s Biomes, Celestials, Fog, Landscape, Weather and more. Some Dimensions might even have Meteors falling from the sky, making them hostile places to visit.

As you explore different Ages, more Symbols will be unlocked allowing you to travel to new places. Don’t forget to create a Book to return to the Overworld, or you might just be trapped in an Age you can’t survive in.

Another dark and mysterious dimension is The Betweenlands. It isn’t too easy to access either, as it requires you to find a Druid Circle within a Swamp Biome, obtaining a Talisman and creating a Portal Tree.

Surviving in The Betweenlands is a difficult task. Torches will go out, and any food you have will slowly rot away. Not to mention the countless hostile creatures that patrol the biomes within.

Throughout The Betweenlands, different structures can be searched and looted, ranging from underground ruins, to tower-like fortresses. There’s also new blocks, plants, equipment and more, and this mod is not one to be skipped.